Johannes and I participated at the godot wild jam 48 having the theme moon. Our submission is Crack in the shell: A race against time in space. Will the oxygen last to get back to the base?

Since Johannes has a beta-subscription for Dall-E, we were a bit curious and tried to generate interesting logos. We ended up with Closeup of an astronaut helmet flying towards a black hole, 8k, award winning and chose the third one:

We wanted to make an immersive 3D game on the moon. But we knew our abilities creating a convincing atmosphere are limited. So we tried creating immersion by balancing sensory overload with controlled guiding. Lastly the sound- and audio design helped us to gain more space aesthetics.

You need to survive while oxygen is almost empty and without any orientation. Basically an oversimplified labyrinth with timer.

“Mind the crater, if you get in, there is no way out.”

With voice lines from the helmet AI and the mate from the base, the player has constant feedback about beeing on track and doing the right things. Next we had a satellite map that can be shown live on-demand. The satellite itself is visible in the sky by his blinking lights giving the player a constant safety net.

The atmosphere starts within the intro: heavy breathing. It gives the player an immediate hint what this game is about. The crack sound is synchronized with the title to point out the challenge.

The scene itself starts with an alarm and an AI voice. I used Ableton Live to chain some effects:

Next to the AI, the mate tries to communicate with the player via radio transmission. With some more effects this radio vibe can be added within godot1: 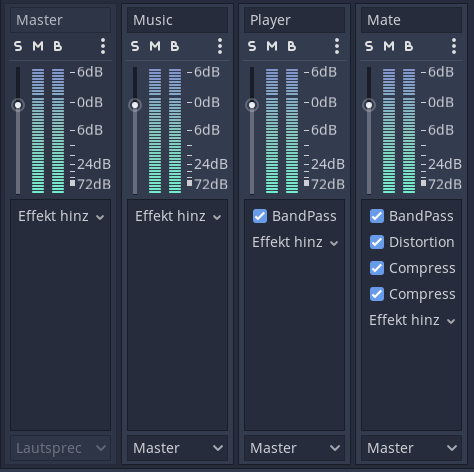 How does the moon sound like? This is easy in reality. No atmosphere means -> no air were sound can travel -> silence. But cinematographically a sub bass consisting of just a sine wave with sweeping low pass filter and volume adds some depth to the scene. This can be heared in the track Welcome to the moon.

When the oxygen tank is almost empty, the more dramatic track Wrong path adds promptly more tension. Starting with gentle and quiet detuned bells, adding a ascending “staried” loop inspired from the matrix movie soundtrack. It will envolve, adding tension and finally drop when the oxygen tank is empty.

Finally when the player reaches the base in time, some pads with bunch of chained choruses reward the player and the mate speakes without any effect in his natural voice.

The satellite is a model with a camera facing towards the center point of the map. The rotation is made simply by rotating the center point. The camera is then mapped to a viewport on a tablet model that can be toggled by the player.